All I want is to get the words right. 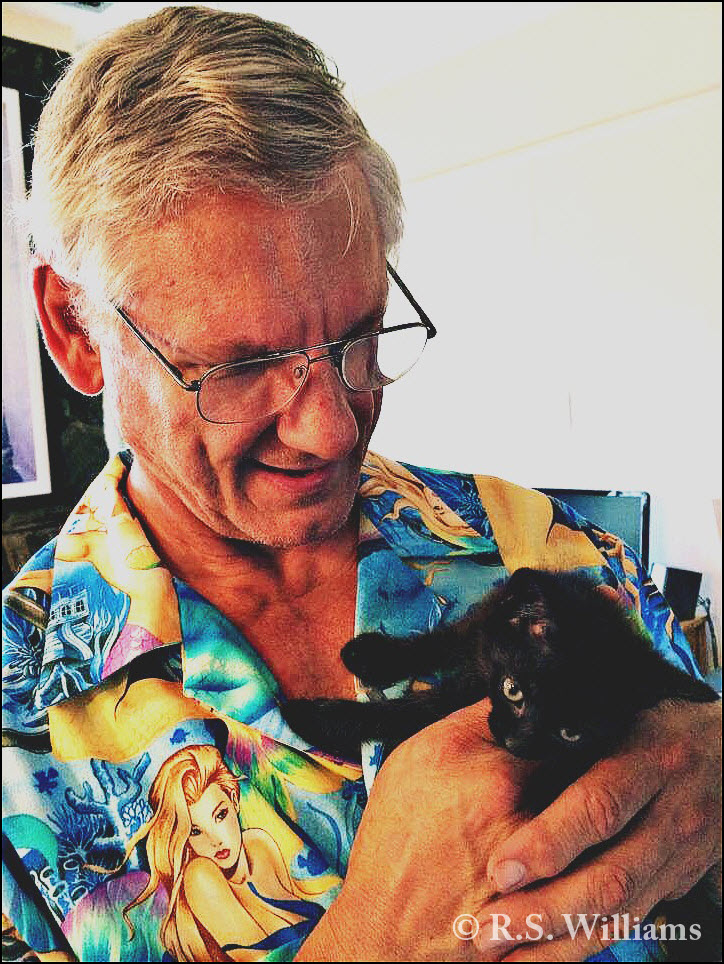 Today is my stepfather’s birthday. Steve has been a part of our family for nearly a quarter-century, and I don’t know what we’d do without his witty humor, his genius handyman skills, and his kind heart. He also has a knack for rescuing baby animals in need.

In this 2014 photo, Steve’s holding my solid-black cat Miller, still a kitten here, whom I’d adopted a couple days before from the Walmart parking lot. Steve is the reason there are so many pets at his and Mom’s house: “Awwwww, look! That poor little abused kitty [puppy/piglet/calf/foal/donkey] needs a home!” Ten cats and five dogs later—yep, you know the drill.

I also don’t know what we’d do without Steve’s obscure Southern vocabulary words. This considerable vocabulary includes exceptional profanity skills for emergency situations. While my favorite Steve phrase is “shining like a diamond in a goat’s ass,” he’s at his verbal peak when danger is near.

One summer afternoon in 2007, Mom, Steve, and I were grilling out at their house when a large hornet flew up out of nowhere. Close to three inches long from antennae to stinger and wearing angry-looking yellow and maroon stripes, it made the kind of noise that lets you know an insect means business. Sure enough, the hornet made a few dive-bombs at Steve and me. We panicked.

The hornet kept circling the porch, probably looking for its nest entrance. Each orbit brought it closer and closer to us. When it disappeared into a small crack between the eaves of the house, we could still hear its hostile buzzing. This did not bode well.

“This thing is huge, Mom,” I called. “You better bring the big guns.”

“Just a minute,” we heard Mom yell back from inside the house. She’d been through this before and was in no big hurry to get back outside. The hornet had probably been there for weeks. It would no doubt still be there when she got onto the porch.

Despite my stepfather’s being a formidable-sized guy at 6’2” and 240 pounds, there are two things that rattle him: any kind of thorn-bearing plant, and any kind of stinging insect. I have seen him jump off of more ladders than I care to count when one of these bugs comes buzzing by, just minding its own business.

As such, Steve’s plan of action upon seeing a wawst takes one of three directions:

So there was no doubt in my mind Steve was going to put into effect one of his usual three modus operandi this time, too.

“Brang the wawst spray!” he shouted back into the house. “I can’t grill with this damn thang flyin’ around my head! I’ll burn the steaks!”

“I’ll be out there in a minute,” Mom shouted back from inside the house. “Let me find the ‘wawst’ spray.” Originally from Michigan but having lived in the South for almost 50 years, Mom still pokes fun at a few Southern-accented words—including wawst.

“Hurry!” Steve shouted. “You don’t know how big this thang is!”

“I’m sure it’s the biggest wawst ever,” Mom replied, without affect.

“HURRY! This thang’s as big as my left nut!”

At which point I collapsed on the ground, laughing too hard to move, speak, or breathe.

Mom finally emerged from the house, the can of Extra-Strength Wasp and Hornet Killer in her hand. “Mom! MOM!” I gasped between belly-laughs. “It’s as big as Seeben’s left nut!”

“Yes,” Mom said. “And you’ll also notice that it’s always ‘as big as his left nut,’ never the right nut.”

Happy birthday, Seeben! I love you!

It’s a bonkers-busy deadline #Caturday, so Buddy’s giving Flannery a bath while I work and drink coffee. 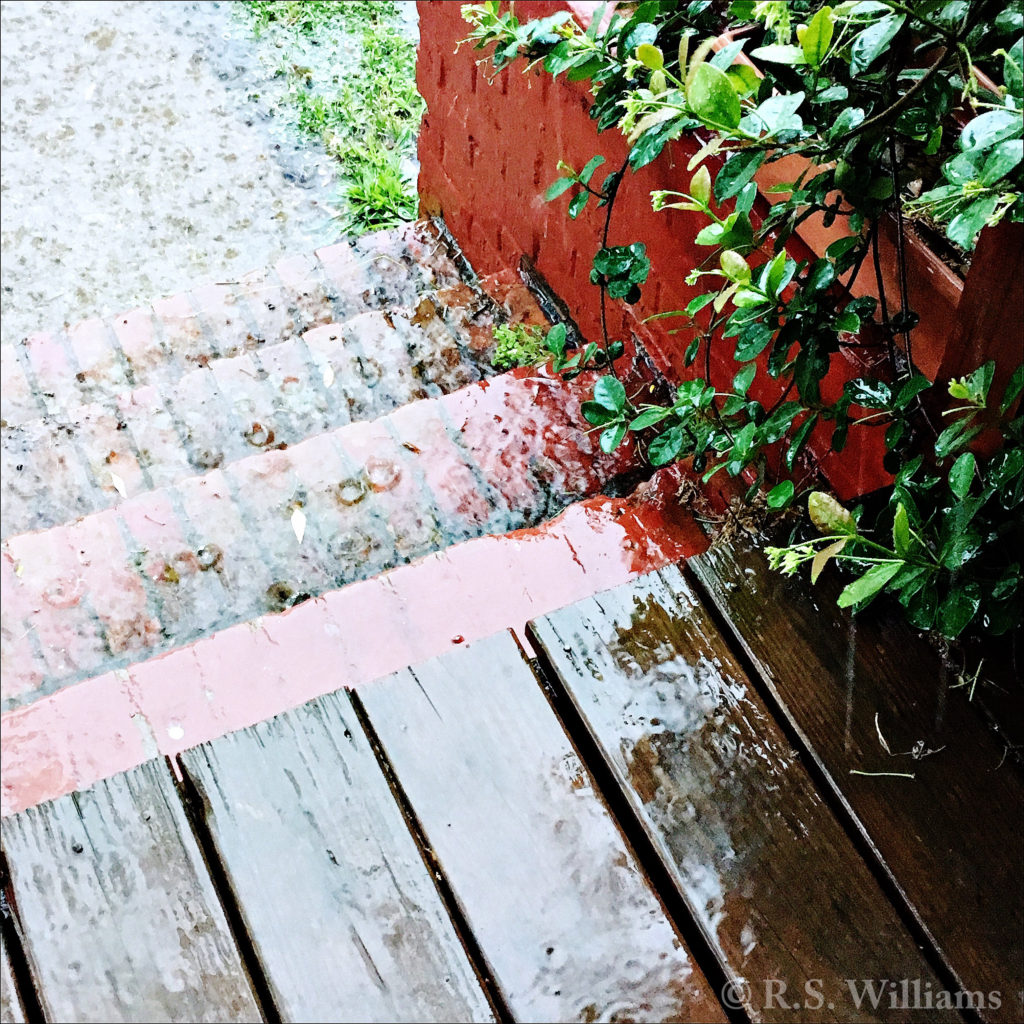 If you don’t write the book you have to write, everything breaks.
— A.M. Homes

The Daffodils That Always Mean “Home”

Living in a small town often means commuting a long distance to work somewhere else. Before I began freelancing, I drove about 90 miles round-trip to my university teaching job. While the commute itself sometimes bored me, the scenery on U.S. Highway 27 between LaGrange and Carrollton never, ever did.

It’s almost spring now. In the Deep South, spring gives us an ice storm one day and tornadoes the next. This year’s early warm weather has brought out the daffodils a little early. I love watching them pop up along U.S. 27’s shoulders.

When you see daffodils, you can safely assume that someone put them there. Unlike seed plants, daffodils and other bulbs have to be dug up and replanted. In order to get them from where they are to where they’re going to be, someone has to move them at the right time of year (late spring, after blooms and foliage have died back), transport them to a suitable location, and plant them.

Most of the daffodils we see along the roadside make their homes in someone’s yard. Sometimes they’re in neat flower beds. Sometimes, as is the case with my own yard, they’re randomly planted in a sunny patch of lawn to surprise everyone, year after year, with unexpected yellows and creams in a sea of brittle brown grass.

But what about those planted in or near a roadside ditch—without a house nearby?

Just because you don’t see a house doesn’t mean one hasn’t ever been there. Daffodils stay underground most of the year. Once they’ve finished blooming, their leaves die back and don’t reappear for another year. Old houses get demolished, and their sites fade into and gradually out of memory. Yet the bulbs embedded around them come back every spring thereafter—house or no house.

Plant ghosts, I call them. They don’t know the house and the people are gone. They come back because this is their home. In every sense of the word, they are rooted here.

The daffodils pictured above are very simple, single-cup daffodils, an old variety we often see around old houses. They’re about 12” tall, and amazingly hardy. Judging from what’s left of the house, and from the size of the flower clumps, these daffs have been here for about 50 years.

Behind the thick, overgrown privet hedge, nearly 20 feet down the bank from the southbound lanes of U.S. 27 in Carroll County, appears the faint outline of a house—or what used to be a house, anyway. Out in front: these happy yellow bells.

I wonder why the last residents left. I wonder if they left in a hurry. I wonder who decided to let a once-sturdy farmhouse simply fold itself back into the earth.

I wonder if, on leaving, they took one long, last look toward the flower bed. I wonder if they wept for the flowers waiting beneath its surface, for the daffodils that always mean “home.”

NOTE: An earlier version of this post appeared at Forgotten Plants & Places on 25 February 2012. 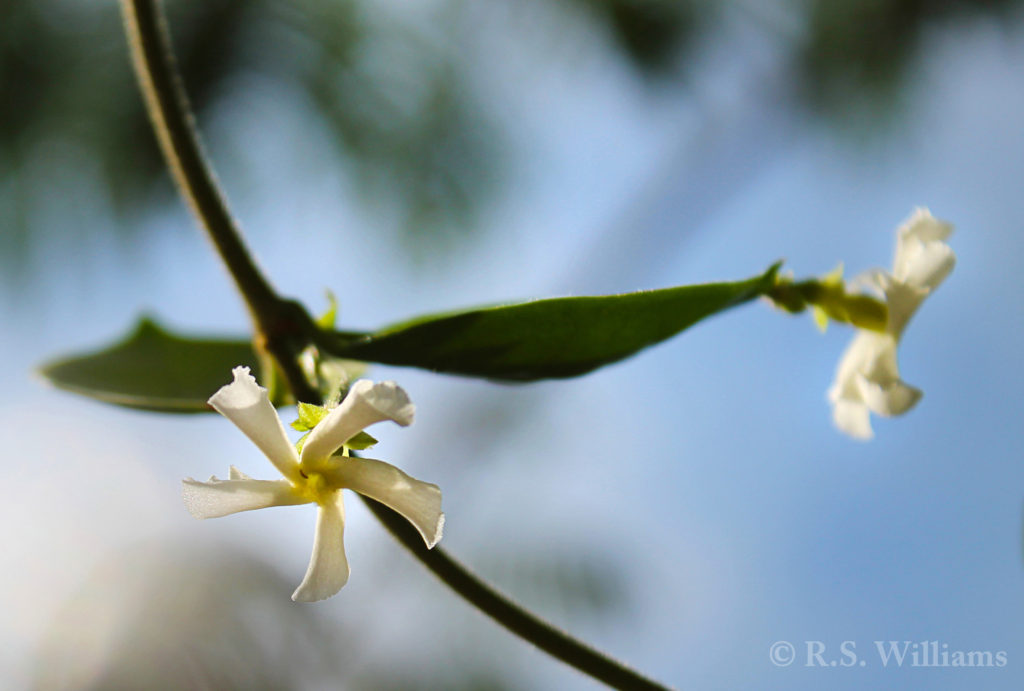 Keep some room in your heart for the unimaginable.
— Mary Oliver 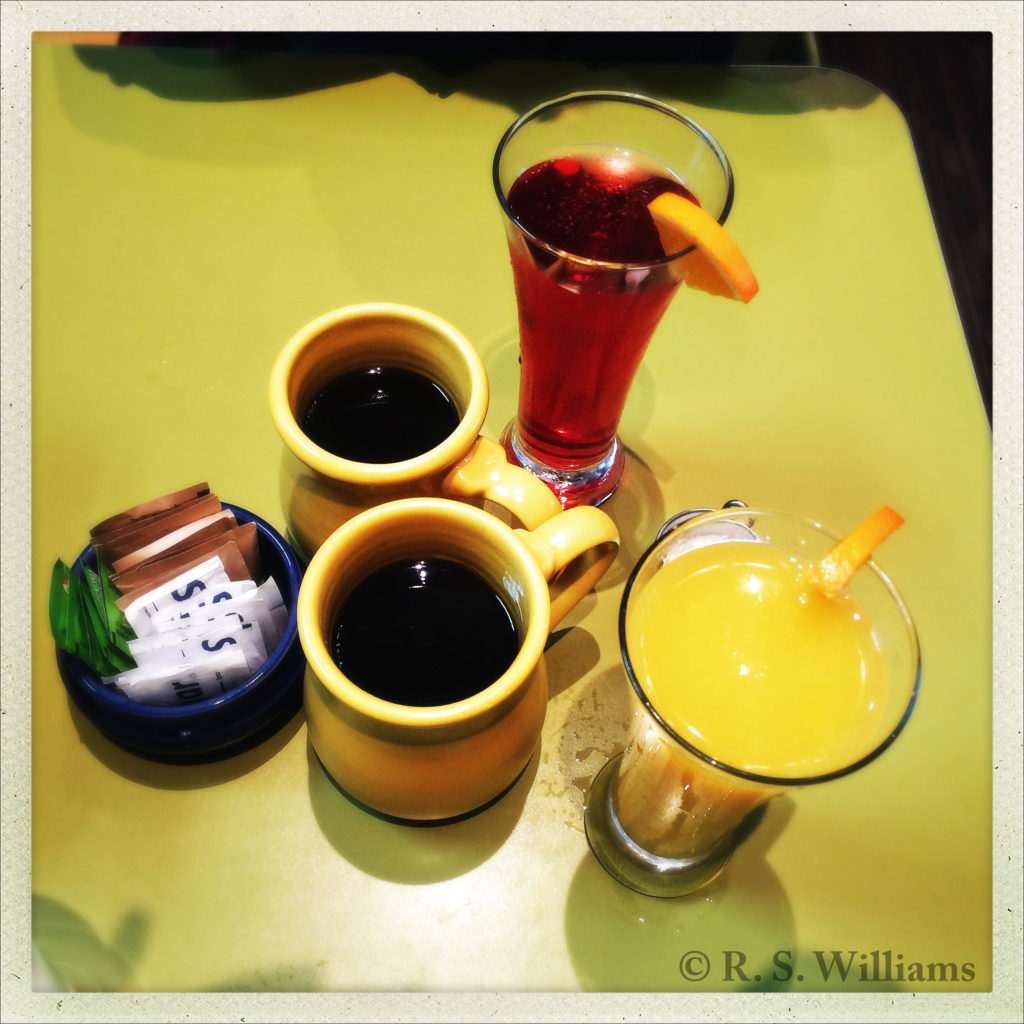 Many, many thanks to the following for their patronage:

These folks help me produce more of the stuff they enjoy. They get my original photos, short stories, and creative nonfiction series not published anywhere else. Thanks again, y’all!

You, too, can help support my work. Just $1 a month earns you special patrons-only content—photos, poems, creative nonfiction, and behind-the-scenes secret stuff that nobody else gets to see. Find out more on my Patreon page. 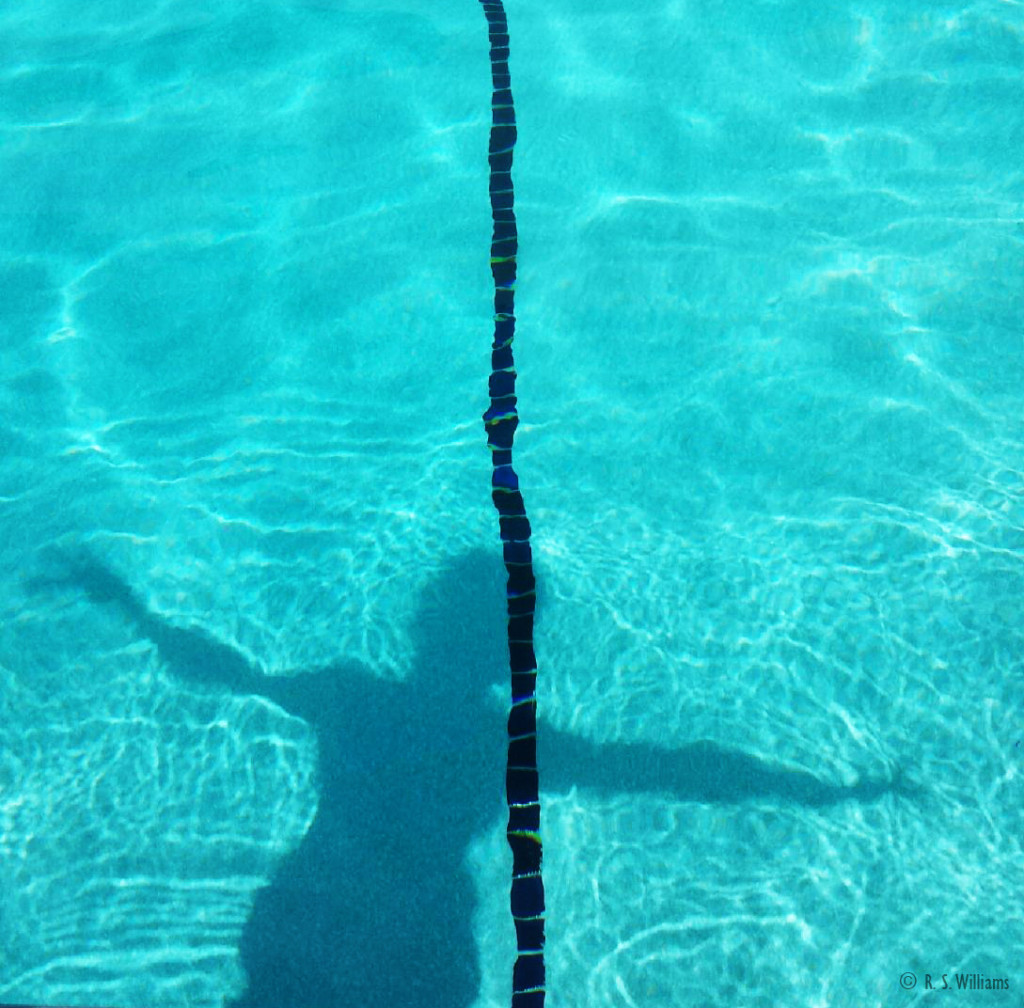 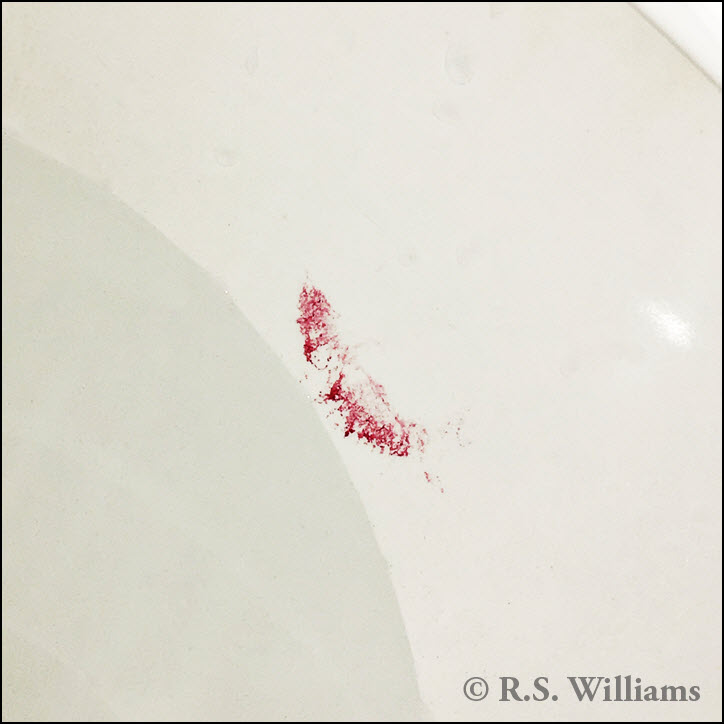 This photo to close out the calendar year was an accident. No, really.

After applying a new red lipstick, I blotted the color with a square of toilet paper, then tossed the TP square into the toilet bowl. Several hours later, long after I’d flushed the toilet, I lifted the lid and saw the carmine-red half-kiss still on the side of the bowl.

The beauty of blazing red pigment against clean-yet-crawling-with-germs white porcelain? It’s a fitting metaphor for 2018. 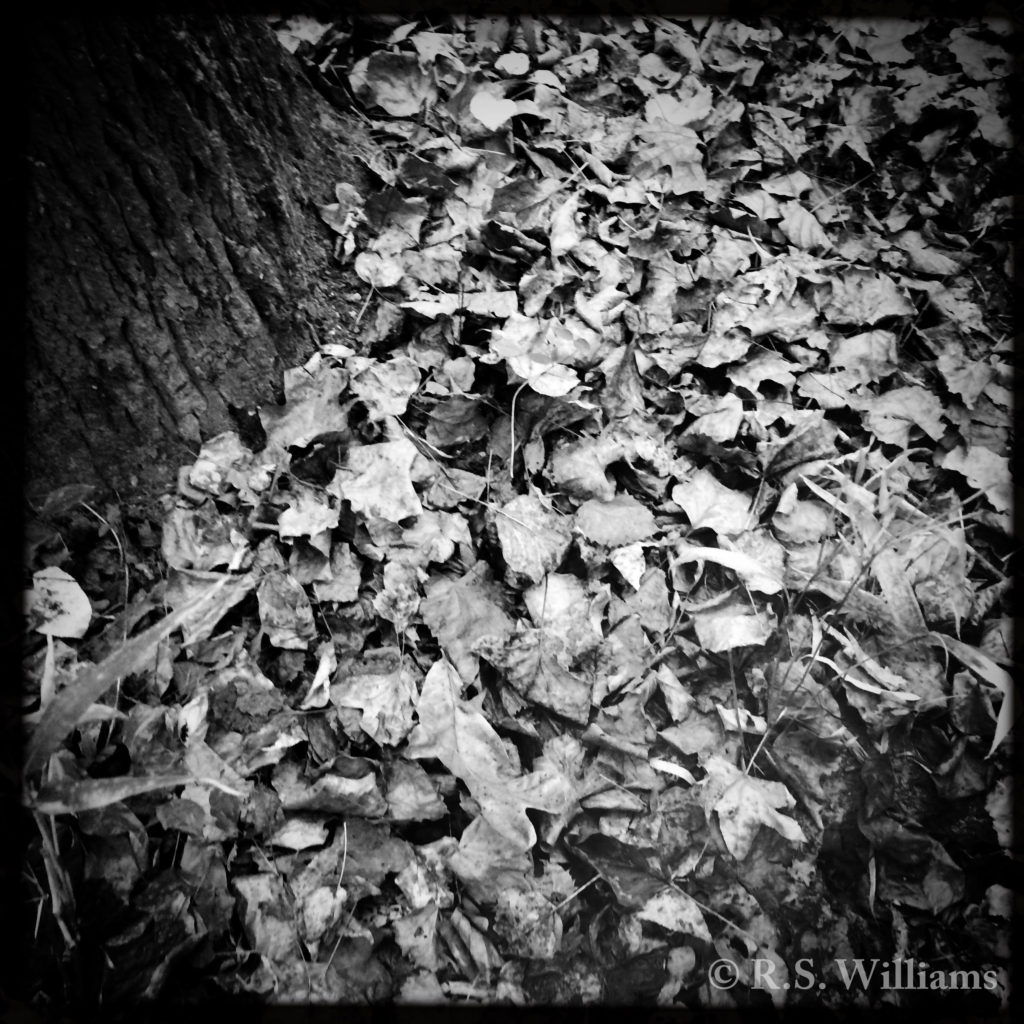 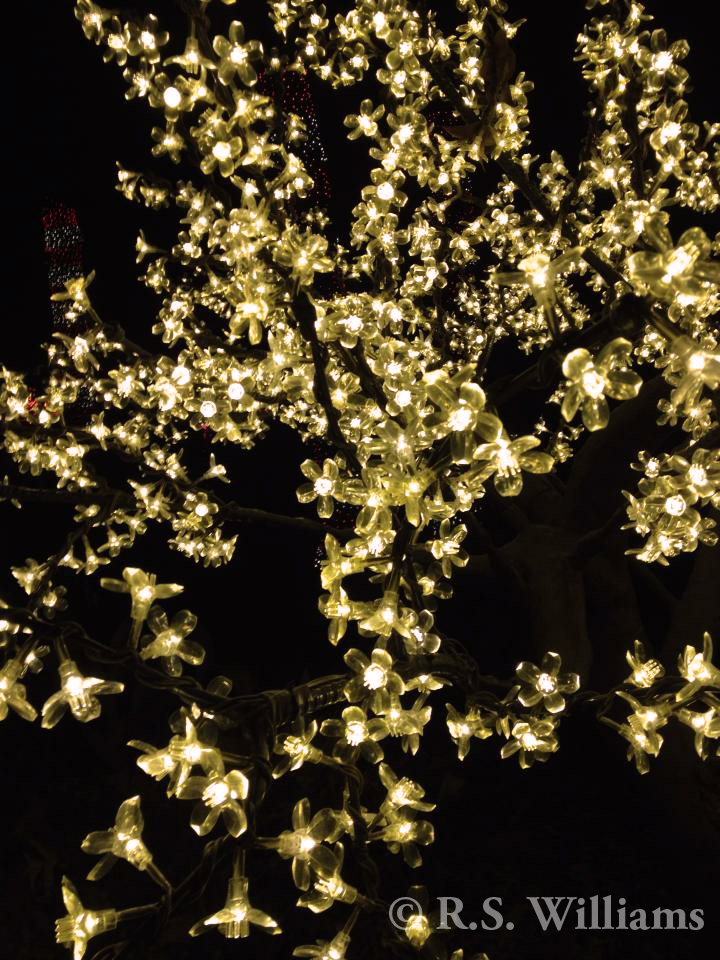 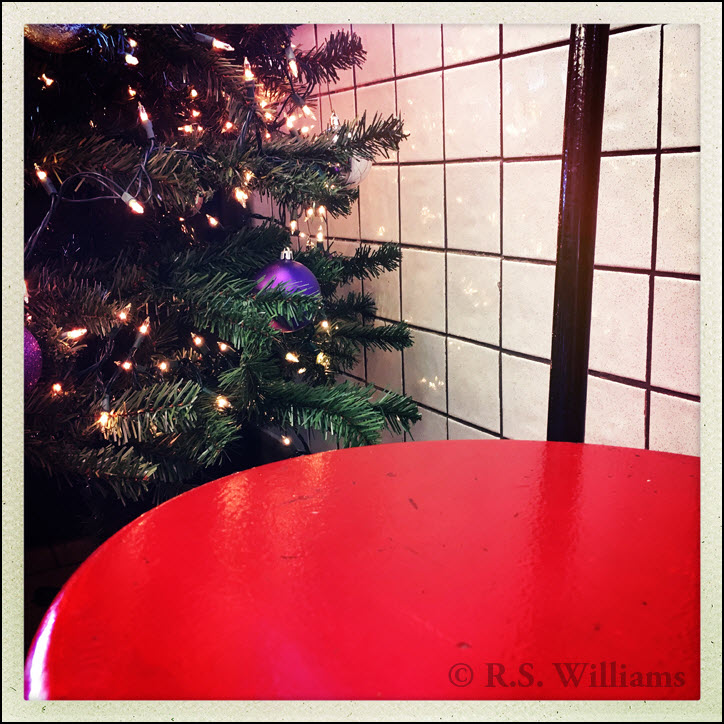 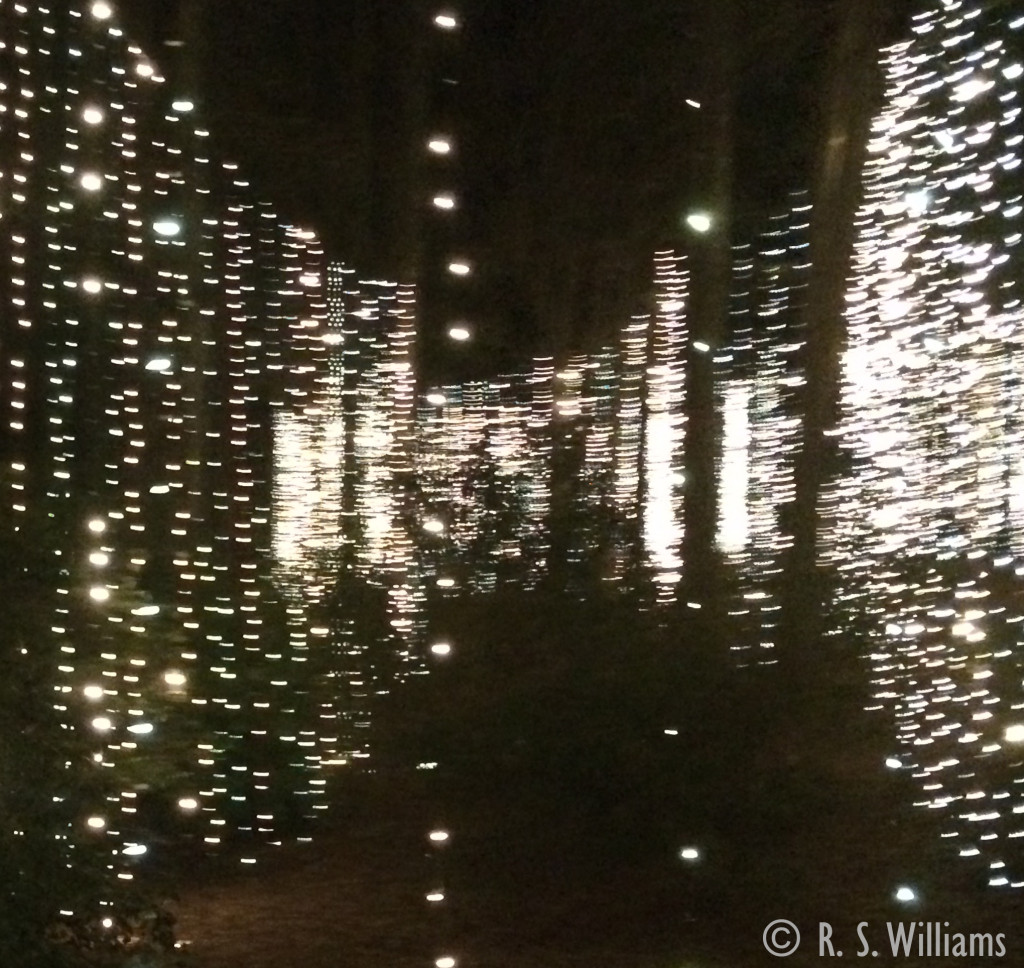 Someone Has to Be. 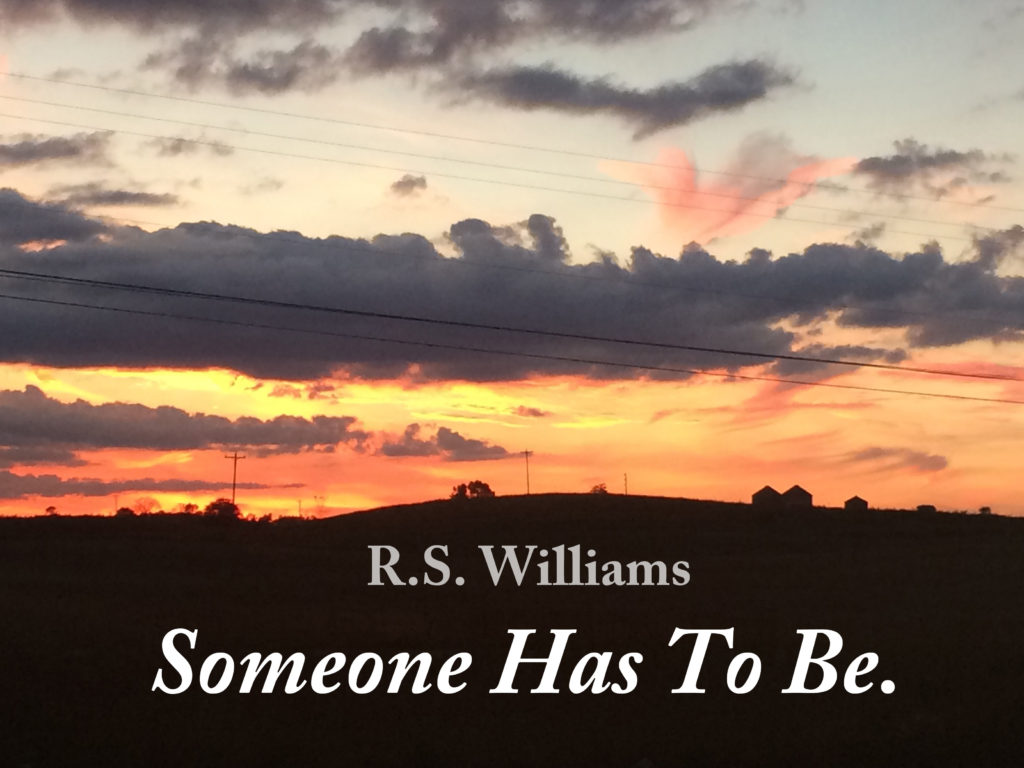 Rubygene looked down her nose at me with a pinched little expression, part frown and part sneer, the kind that indicates complete disapproval, utter disgust, or chronic hemorrhoid pain. With her, it was always difficult to tell. “Don’t you think you’re being hard on the great state of Alabama?”

I shrugged. “God knows someone has to be.” Purse in one hand, I readjusted my hat with the other and made to leave. “Now if you’ll excuse me, I have people to see and bets to place.”

“You have what to place?!” She huffed after me onto the wide, cool, screened-in porch that my grandmother kept wrapped in ferns. The sound of barely-controlled laughter told me Aunt Birdie and Uncle Ralph were already four to six sheets to the wind—at nine-thirty in the morning. In most families, this is a disaster. In my family, this is Tuesday.

“If you need me, Rubygene, you can find me at the track,” I said as I nodded to my great-aunt and uncle. They smiled and raised their highball glasses in my direction. “When the horses call, I answer. Don’t you go cooling my lucky streak.”

Uncle Ralph staggered up out of the mildewed club chair and pulled a crisp $100 bill from his wallet. “Here, Myrtle Mae”—buuuuuuurp. “Put fifty dollars on Lucky Bastard, at forty-nine-to-one.” He bowed deeply and almost fell onto the gray enameled porch floor. “Buy yourself something purty, while you’re at it.”

“Why, thank you, Uncle Ralph!” I hugged his neck and steadied his descent into the creaky wicker chair. He was a notorious tightwad, except when it came to liquor, or to getting on Rubygene’s last good nerve. “See?” I turned back to my grandmother’s other sister. “At least someone around here recognizes that I know what I’m doing.”

Rubygene stared at me in silence, then whirled on her heels and stomped into the house, the scalloped fuchsia edges of her orange housecoat flaring out like a daylily—a nosy daylily that couldn’t just stay in its own flowerbed and do what the good Lord intended. But I didn’t have time to worry about her. I had to be in Thunderbolt by noon.

Theme by Anders Noren — Up ↑